Today we had double missions: to extend Ega’s visa, then to submit Aisar’s driving license application stuffs. Since Aisar already took absence from his office, which is a rare moment, before sleeping at night, we suddenly wanted to add another plan: visit Tsukiji, that is the most well-known fish market at Japan. So, it should have been triple missions though, but finally we gave up for Tsukiji. Not because overslept, but we could’t meet taxi to go to station (4.55 AM), while a couple minutes late to station means no hope for getting entrance ticket if we’d like to watch the tuna auction (maximum 6.45 AM). Yes, here nearby Kamiooka station, the earliest train runs about 30-60 minutes before the bus operates. Taxi is the answer. That’s what we remembered at that time. Too bad to realize later on: why didn’t we think about riding the bike? 😦

Back to the main missions.. I’ll tell you one by one.

For long-term stay in Japan, we can apply for working, general, specified, diplomatic, or official visa. From March 2011 until this June, I have general visa with “college student” status. On my alien card (now it becomes “residence card”), it was written as ryuugaku (留学), which means “study abroad”. Since last year I’m married and this March I’ve graduated from my master program, while Aisar is still working as engineer, I must extend my visa for along the valid period of Aisar’s visa and change the status at once. Our choice for the new status is “dependent” because I’m not going to work (note: full-time) and Aisar plans to take master admission for the next year enrollment (note: outside Japan :grin:). Highlight: we may not be much longer to live here..

Started at 7.30 AM, we departed from home and headed for immigration office. FYI, the office, Yokohama Immigration Bureau, is opened since 8 AM and the queue can be even formed beforehand :razz:. This office handles immigration affairs in Kanagawa Prefecture entirely or even folks from Tokyo area, so basically  it always operates in a rush. Come as soon as possible after the gate is opened if you don’t want to wait too long!

To change my visa status from student into dependent (the cool term is kazokutaizai = 家族滞在), based on information from Ministry of Justice webpage, I was asked for the following documents:

After around 20 minutes of waiting, a staff in locket number 2 called me to check all requirements in front of us. Attention! It took quite long and probably needs your negotiation skill if there any missing documents :lol:.  The staff gave me back my passport and handed me a sheet to be brought when picking the new visa. Duration for waiting the new visa issue can be different from one person to another. As it occurs in Japan embassy of my country (and might be in other countries), they need to review case per case our application before deciding to approve or not. However, in average it takes three weeks.

I had just got notification memo (hagaki = ハガキ) on May 17! Yeah, more than a month. Five days later, I went to immigration office again and after waiting for an hour.. taraaa! I was surprised and became understand what the new residency system means. Instead of getting the new visa sticker on my passport, I didn’t get anything else except a residence card to replace both my previous visa and alien card. See the photo below to see the transformation. Finally, welcome my new status. I’m a full-time wife and not “alien” anymore!

Let’s turn to Aisar’s story. It has been few months since he said he wanted to have driving license. Not for buying car, but at least ensuring safety (from police :eek:) if someday we’re gonna rent a car. Selection for getting Japan driving license is widely known as difficult to pass, but people say it would be much easier if the applicant already has a valid driving license in their home country (for foreigner). Aisar is included in such applicants, so by relying on his driving license level “A” in Indonesia, he was confident enough.

The first step to do by Aisar is going to JAF (Japan Automobile Federation) nearby Katakura station to translate his driving license from Bahasa Indonesia to Japanese. For this, I paid 3.000 yen. Expensive :cry:. It can’t be helped because you cannot do it by yourself. The translation must be issued by authorized party such as JAF and that’s not just a translation, but an official part of driving license switching (gaimen kirikae). We waited for a half of hour here.

From JAF, we directly went to driver’s license office (operated by Kanagawa Prefecture Police). In our region, Yokohama, it’s located in Futamatagawa (Sotetsu Line). There is a bus-stop with highlighted signpost “Driver’s License Office” in the bus terminal so you will not get lost. When we arrived office, Aisar rushed to the counter for Foreign Driver’s License Exchange and there had been eight foreigners were lining in front of it. Ah, ‘It won’t be long’, I thought.

Actually, we didn’t need to await anything to submit all required documents brought by Aisar to the staff, but.. he asked us to wait TWO HOURS afterwards. What??? Sigh.. 😦 Aisar said that indeed, bureaucracy in driver’s license office is the most old-fashion public service owned by Japan, so that’s why everybody has to wait for that long -_-” Anyway, we were grateful as foreigner our queue was still much fewer than Japanese counter.

To complete the administration, Aisar went to photo booth and made his passport photo with designated size. It costed 600 yen with the poor cutting (see the photo below, the proportion was so error >.<).

Two hours of waiting seemed not worth when the staff finally called Aisar, then told him that his driving license card from Indonesia could not be approved due to a trivial reason: the font is not standard. What??? Yes, even though Aisar had provided the Japanese version (translated by JAF) of his driving license, the original driving license card might be submitted as well, then they checked the authenticity by matching with other cards from the same issuing region. For example, Aisar’s card was issued by Denpasar office, so they checked it with default format of driving license cards from Denpasar that were ever submitted there previously. If there any difference, they ask a evidence letter from the office concerned. Weird, huh? How if an office changes their layout or font used in making driving license for every some years? That’s why, Aisar said, the staff told him that applicants from China, for example, must always provide such a letter because either format or content of card can be different in each region (there’s no national standard format :lol:).

Aisar is very skilled in arguing, but we had to give up at that time. we left the office with a letter containing the document that should be carried out for the next time: proof of driving license issue by police office in Aisar’s hometown (which is difficult to get) and all documents submitted previously (they returned it back). Unfortunately, Aisar preferred to not continue his struggle. Hahaha.. bye, bye, driving license (for the time being) :razz:. 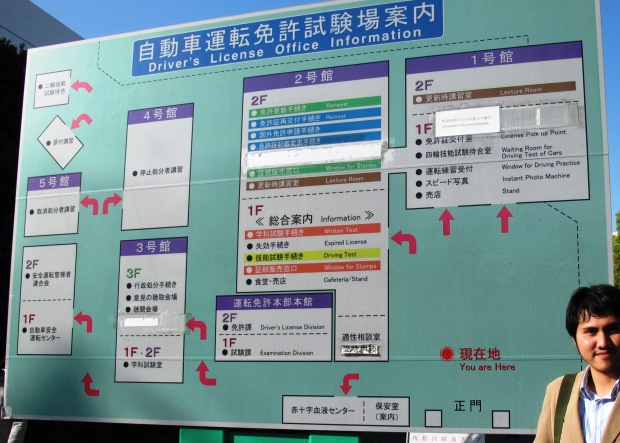 Board in front of office 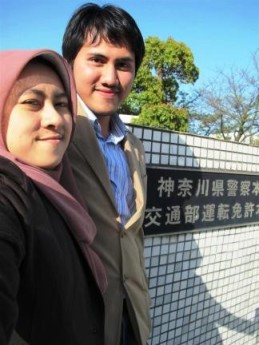 Memory photo in front of the office 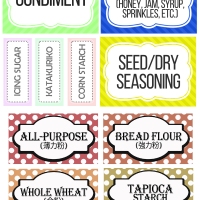 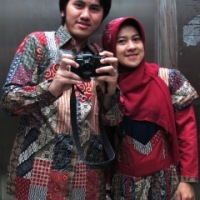