This post is related to a photo album on my FB: Musa’s Meals Diary

If you have read my post about welcoming solid foods for Musa and the review in the first week, you may want to know what he finally ate up to now. When I’m writing this review, he’ll become 9 months within two days, so almost three months of eating! (Read: what I mean with eating is consuming solid foods besides milk feeding.. :D)

I set up environment, routine, and style since the day 1 in giving Musa solids, but it was little disrupted in the second month when we went home country for three weeks. I didn’t wean him ideally during our stay in Indonesia because we traveled either inside or out of city/town almost every day. Time and tools to cook were limited as well, so before we settled at my parents home in the last week, I relied on jarred/tubed fruits/vegetables we brought from USA and also the fresh produces we got locally. Thanks to Allah, I found it was easy to serve him raw fruits/vegetables while being mobile. I wonder if his self-feeding habit has trained him to be such independent eater.

The review similar to this post will be made in series for six months of eating and I’m gonna make summary of the new foods for each month. I’m not 100% following recommendation about time to give particular food, but I find that Wholesome Baby Food website is nice to use for checking the reasons, so you can estimate the risk when you choose to differ. For example, broccoli is not recommended as the first food because it triggers gas (yet, I still gave Musa it in this first month and he was okay.. hahaha).

Besides the food summary, I also include a table containing meals of the month. Since I don’t make meal plan for Musa’s baby food (err.. I meant, I ‘write’ it in my head :D), the list helps me to trace what I’ve given to the baby from nutrition viewpoint.

So far, I didn’t find any allergy with the foods he ate, but he experienced one-term (2-3 days) of diarrhea right at the 5th day. By tracking his foods in the previous days, nothing was susceptible as a cause. Based on little research and mommies experience, we were pretty sure that it’s an effect of Rotavirus vaccine he got on Nov 12, 2015 (the day before we found his stool watery).

Below is the list of his meals this month. Again, this is not meal plan because I didn’t arrange them prior to cook, but every night I recorded what he ate in one day. Sometimes I missed to log his foods, so if you see the table there are some empty cells. Please use this meal list if you need idea and feel free to ask me the recipes of foods you want to know. However, I post recipes occasionally along with photos on my FB album (see above). If you make the meal plan, my suggestion is to improve the list with amount of each foods.

Menu list 6 months. See the guide above to read this table.

In this first month, Musa was aimed for having mealtime at least twice a day with one “big meal”. That is why, if we look at the table, he had only meal with multiple food groups at lunch time. I found that afternoon was the easiest time to give him big meal because he was used to be in the peak of his activities, so necessarily felt hungry and would eat his foods. I just needed to strive for preparing his lunch before 2 or 3 PM since he might want another nap at that time. Musa almost never skips his first nap at 9 or 10 AM (he wakes up early along with us around 6 AM), so his breakfast should be something quick and he loves to eat. He’s normally still sleepy and not too interested to foods. As much as possible, I don’t expect a struggle in breakfast. For those reasons, fruit or vegetable is the best choice to serve, either in puree (spoon-feeding) or its original form (baby self-feeding). Also, since this month, I’ve also already given Musa chance to eat by himself (a la BLW baby) at least once a day. 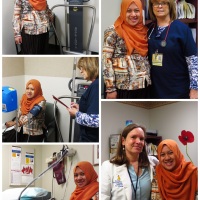 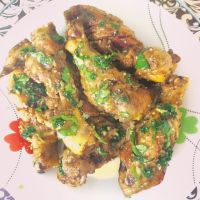