This post may be better written by Aisar as his heart talk, but yeah.. as usual, he hasn’t got interest to write down anything yet. The last post on his blog was released almost one year ago :eek:. So, I’ll represent him to share about this matter.

Careless is one of my weaknesses. I know it and (thanks Allah) I’ve been realizing for several years ago. The problem is “I haven’t managed to dismiss it yet”. I was thinking it’s much more passable already, moreover recently when having someone who scolds me sometimes for this bad habit, but today’s incident looked to show that I was totally wrong :sad:.

Just now, we spent DOUBLE time and cost for reaching home due to my secondhand-iPhone-3 apparently left behind in SRIT (we just had iftar together with Indonesian Muslims there).

Late to be aware, we stopped at Shinagawa, the station where we should have moved to another train line, then called a friend who might still in location, called another person, and so on, which took 45 minutes. Concisely, my mobile phone was found, then we went home at 11 PM. By this incident, I completed a ”hat trick” record: cell phone stolen, cell phone dropped, and cell phone left behind, and only at the last one I could meet my phone again (-__-)”. Lesson I learned: practically, we can throw away our weakness by eliminating its causes. As long as we cannot avoid it, never expect to say goodbye to the weakness. In my case, two common issues are

Less awareness to small things, including less idea about whether it has been carried or not 😀 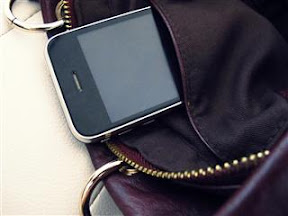 Aisar warned me to keep each stuff in a fix place and always do like that. Woman usually has a handbag with many compartments and so do I. ”Assign” each pocket to load particular things and never change it. Example:

I just remember, in another day Aisar ever scolded me when he found my Pasmo card was lying on the carpet 😀