Thanks to JR Tokyo Wide Pass, we could travel to as far as Nikko, Izu, and Kusatsu Onsen in Gunma without breaking the wallet!

And seriously all the venues posted here are kids friendly and accessible, by train or bus ride. One thing to note, we got into the bottom of this beautiful 100 m deep waterfall in Nikko, not by foot, but by an elevator! Who would build an elevator near a waterfall, if not Japanese.

I seriously adore this country nature and the people who built it.

Nikko station from the front. We could feel the sensation of “heritage site” since this starting point. The stations we passed along Nikko Line are also designed in vintage style.

That famous Shinkyo Bridge. We decided to walk to reach this spot because the traffic jam was terrible when we arrived at Nikko station. It’s not far and even interesting to see the stores along the main street which some of them were listed in the walking map.

Kegon Falls at Chuzenji Onsen area. Must visit scenic view in Nikko, the best among popular waterfalls there such as Kirifuri, Ryuzu, and Yutaki.

Some shoots taken around the Kegon Falls: (1) Musa with the blueberry chocolate from souvenir shop (2) Us in front of the fall (3) Medal machine –> tried to make it yet failed (4) Rocky cliffs

In the third day, we went to Gunma Prefecture because I wanted to go to hot spring (温泉: onsen) again and there’s famous spot of Gunma called Kusatsu which is reachable by JR express train. Kusatsu onsen has one of the best hot water sources in Japan. Besides, this place is also ‘complete package’ for escaping busy city life: mount hiking, ski resort, golf, and large zoo. 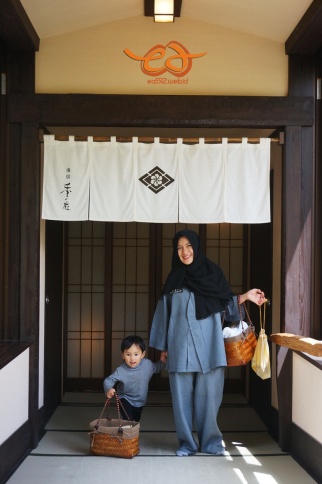 Ryokan (hotel) look – outside, on the way to the onsen room

The room we occupied for only three hours was too comfy and nice. I wish I could stay longer T_T

More information about the place we stayed: 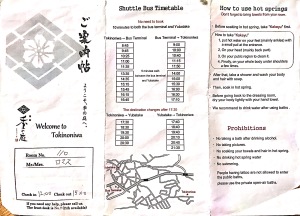 Some captures from our social media:

One of hotel who provides private onsen units in Kusatsu Onsen, Gunma. Worth 3 hours stay!